I don't know about you but when I start administering spring assessments I realize that my students need to dig deeper into the predicting we have practiced all year long during picture book read alouds. It is in the spring that they are ready to think more about their process for making what we term...thoughtful predictions.  They have matured as thinkers after sharing and building on the talk and ideas that we have had as a community.  Today,  I had one student say (after making and confirming some predictions during Somebody and the Three Blairs), "Gee I am lucky with these predictions today."  I had to jump in and say, "You were thoughtful!" Then we back tracked to trace his process of thoughtfulness.  Did he use what you know about the original story of The Three Bears? YES.  Did he use what he know about pictures and words in text? YES. That resulted in not just luck but a series of meaningful thought.
When I realized we needed to dig deeper, I began by stepping back and finding text that would allow kids to predict using pictures in a simple (predictable ) text.  Hugs From Pearl and Perfectly Percy are two texts by Paul Schmid that helped us begin to rewind and identify our process as predictors. 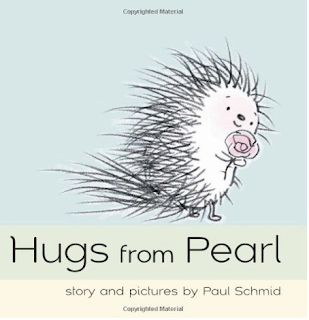 Hugs from Pearl is the story of a little porcupine who loves to hug but her quills get in the way.  She solves her problem on her own as she is thinking on her way home from school. 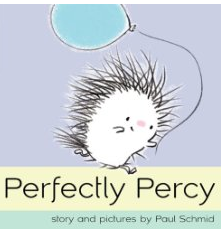 Percy is Pearl's brother and he loves balloons but can't seem to keep them around with his quills.  Percy asks for help but isn't satisfied with the ideas Pearl shares so he thinks and perseveres with his thoughts until he solves his own problem!

These two stories invited opportunities not only that allowed us to predict but also to learn about the importance of problem solving and persevering.
Posted by Katie Dicesare at 5:02 PM 3 comments:

This Friday I spent a day in Michigan thinking with teachers about the possibilities for common core writing units K-2.  I want to thank all the teachers who came and for the chance to talk and meet  so many of you.

Please fee free to email if I can help answer any questions or link you with the presentation: katiedicesare@hotmail.com
Posted by Katie Dicesare at 8:45 AM 3 comments: