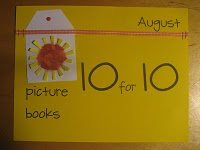 Thank Mandy and Cathy for creating this exciting blogging event: 10 for 10! Go here to read more about how their idea for sharing picture books began. I am excited to be a part of this and decided to share my favorite 10 picture books that boys seem to gravitate toward. So, here goes:
10 Picture Books That Boys Can't Live Without

1. First on the list is Superhero ABC by Bob McCleod. I think I buy a new copy of this each year because it is so loved by June that not even heavy packingtape can keep it together. Thepictures are fabulous
in this ABC text. In fact seeing the kids lovethis text motivated me to create a basket of superhero books ( BabyBrains and The adventures of Max and Pinky: Superheroes) that is loved by many of the boys inmy classroom.

2. Second on the list is Truckery Rhymes by Jon Scieszka. This book is filled with Nursery Rhymes with a truck twist. My son was just reciting his favorite from first grade in the car. The characters in the rhymes also are featured in other favorite truck books by Jon which include Smash!Crash! and Melvin Might.

3. I have had boys who love music and many who already were taking lessons with instruments like piano and even guitar. Punk Farm was a huge hit
for these boys. It features a rockin'rendition of Old McDonald Had A Farm and tells the story of some unsuspecting animals who form a band
and perform at night in the barn. You can listen to the song from the bo
ok here and read the next book in the series Punk Farm on Tour.

4. For the boys who are interested in playing sports, Sergio is often a character they relate to. Sergio is a penguin who likes many things but the three things he loves are soccer, fishies and water. In Sergio Makes a Splash,
he overcomes his fearof the water with the support of his classmates. In Sergio Savesthe Game, he learns how to be goalie and helps his team beat the Seagulls in the championship game.

5. Hi! Fly Guy
is a book that features a boy character named Buzz, his pet fly and their funny friendship. There are 9 Fly Guy books in the series so the adventures and reading never seem to end!

6. Can You make a Scary Face? by Jan Thomas is priceless. It is interactive, humorous and completely entertaining. Boy or girl, this book rocks!

7. Not A Box by Antoinette Portis keeps the reader guessing and taps into those boys who love to imagine. The main
character, a rabbit, begins to play in a cardboard box and the reader (with a few picture clues) gets to guess what the rabbit is pretending to be(mountain, robot, rocket ship). Kids also love Not A Stick.

8. I can't not include Elephant and Piggy Books in this list of books that appeal to boys. Gerald and Piggy are funnyand keep readers feeling like they are playing as they read. The newest in the series is Can I play too? The next in the series is out in September and is called We Are in A Book!

9. Chester by Melanie Watt
Melanie Watt has influenced many of the boy readers and writers in my classroom. Her character, Chester has allowed them laugh, think and connect to the dueling between author and character. I have noticed many boys experiment with the idea of dueling in their own writing. There are two more in this series: Chester's Back and Chester's Masterpiece.
10. Non- fiction. I don't want to forget mention that boys love to read non-fiction but of

course different boys have different interests. I have noticed that many of the young boys I've taught often choose animal picture books with photographs and pictures that take up most of the room on a page with text that surrounds the picture in some way with captions, labels, comparisons, word bubbles, etc. Some non-fiction books that boys have loved in first and second grade are: Sharks and Other Dangers of the Deep, Life Size Zoo, My First Book of Ocean Life and Dinosaurs?!
Posted by Katie Dicesare at 3:30 PM

Great take on the theme...and great picks, too! Love SUPERHERO ABC and PUNK FARM. Thanks for sharing!

I have 2 boys (2 years and 6 mo.) I'm going to start buying the books on your list now! They already love the lifesize animal books!

I just read Not A Stick today and was laughing out loud at how fun it would be for students. Went right into my first week read aloud pile to drum up the love of reading!

Great choices here. I love Not a Box and Not a Stick!!

I must pick up Can you make a scary face? Thanks for joining us and love the list for boys.

Hi Katie--Loved your list! Lots of new ones for me. I can tell I'm going to spend a lot of money on books this year!
Miss you and can't wait for NCTE!
AM

I love how you made your list about boys. I enjoyed reading about books that appeal to them in the classroom. I look forward to enjoying these titles.

Great list! Many new titles for me, thanks for sharing!

I picked up the Life Size Zoo for my 1 year old granddaughter. At almost 1, it is still one of her favorites!! Add it to your girl list too!
Lisa

Love your list. Hadn't read some of these - will have to track them down for my boys this year!
Thanks

Hi Katie! What a great list! I love your choices. I just told a friend who's trading grade levels with me (she'll be the new first grade teacher)to check out your blog for book ideas.